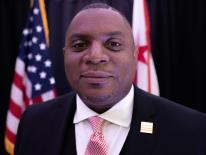 Lindsey is a native of Upper Montclair, N.J. and graduated from the University of Pittsburgh with a B.A. in Legal Studies.  While at Pitt, he was a standout athlete on the nationally ranked football and track teams.  He went on to receive his J.D. from the University of Akron with a Certificate in Mediation.

Mr. Maxwell began his professional career as a bank examiner at the Federal Reserve Bank of Cleveland where he was responsible for evaluating the financial health of banks throughout the 4th District; encompassing Ohio, Western Pennsylvania and Northern Kentucky.  He later served as a legislative aide in the New Jersey State Legislature before entering into the private practice of law in Washington, D.C. at Beins, Axelrod & Kraft.  While there, he represented several public sector unions in contract negotiations, arbitrations, and litigation.  He later became a partner at the Perennial Law Group, a nationally-recognized leader in sports management and representation. At Perennial he represented the NBA Referees Association, the Major League Baseball Umpires Association and dozens of authors, musicians, television personalities and athletes.

He later became a partner at The Bailey Law Group, a boutique firm focusing his practice on labor and employment litigation.  While there he won the high profile case of Westmoreland vs. Prince George’s County where he represented an African American female firefighter who had been subjected to both racial and gender discrimination.  In 2011, he took over as the firm’s head of Middle East operations and spent the next three years advising the firm’s clients in Istanbul, Dubai and Abu Dhabi.

In early 2015, he returned to the public sector as the Supervisory Attorney of the D.C. Public Employee Relations Board.  In this capacity, he managed the legal operations of the Agency and litigated all cases in DC Courts where the Agency was a party.

In January of 2019, Mayor Muriel Bowser appointed him to the cabinet position of Director of the Office of Labor Relations and Collective Bargaining.